This is a story from the future. A forward memory. A dream if you will. A stake in the ground.

Three years ago I was looking out of Speakers House in London’s Houses of Parliament at the buses driving across Westminster Bridge. Hundreds of people on the buses, in the cars, walking and cycling. Going about their daily business on this cold November day in 2014. Behind me one of the speakers was explaining that in Zambia 80% of men admitted to beating their wives – and 90% of wives to being beaten by their husbands. As always the statistics were shocking and the projects immensely worthwhile. There was excellent work being done all over the world to address the violence women suffer at the hands of their partners and other men. More often than not, their partners. Not for the first time I marveled that this could still be so prevalent an issue after all these years of human evolution. What were the men thinking? What were the women thinking? 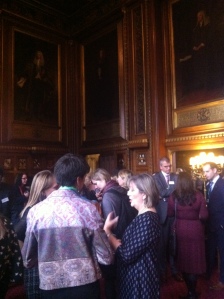 I looked outside again. The ‘real’ world seemed to be carrying on as normal. I was suddenly very aware of the gap between everyday experiences and these projects. I felt a strong urge to do something, anything, that might reach the day to day world view of many. To develop an idea as popular as the Hunger Games that would speak to people, draw them in, open a window of possibility for change.

Immediately I fell into my common trap of trying to identify the solution. Right there and then. But over the next few weeks I realized that I had been in that room too. I was part of that inner circle that “knows” the answers. I needed to talk to the people out on the bridge.

I have four godsons. Fine young adults embarking on their lives. They were no doubt a little puzzled when the godmother they had never had an email from before invited them to a one day workshop to tackle this issue. To their credit they all accepted. They had never met each other, they barely knew me and I was asking them to give up a day of their New Year break to travel to London and discuss a pretty awkward subject. A wise friend coached me on how to organize the day to ensure that firstly I, and then they, were as comfortable as possible. To create and hold the space we needed to feel safe, distinct from everyday reality and open to the expression of any thought however embarrassing or politically unacceptable.

I admit it was unnerving. The night before I wondered what on earth I was doing. Why had I ever thought this was a good idea? I had only the flimsiest of ideas of my objectives for the day. The boys might just clam up or regurgitate cliches. We might make no progress. I was far more ready for failure than success.

But they were brilliant. Right from the get go they talked about very personal responses and experiences of themselves, their friends and acquaintances, with compassion and honesty. They showed maturity and depth in the way they managed themselves and the discussion. They listened well and they collaborated brilliantly with each other to develop an idea strong enough to keep the focus and absorb the complexity. And they landed on some key learnings that have become the underpinnings of the Godson Project.

The main idea that emerged has now become widespread as the Godson project. The first video we made on that day has never been published but it has served us well as a template. The staircase concept, developed that day by my godsons, still serves as a visual metaphor that connects the videos – now in their hundreds – that have been made by young people all over the world. Elements of those first scripts – in particular the poignant irony of the end line “It’s just because I care” or “It’s just because he cares” has survived, as have many of those first identifications of trigger behaviours – checking phones, minding how she’s dressed, the urge to control another person as a way of dealing with our own insecurities, have been a good starting point for adaptation to different cultures, age groups and contexts.

It was not easy to get from that first workshop to the next step. I struggled with the potential enormity of the project. And with my own role as leader or shepherd of it. It took me out of my comfort zone and required me to step up even though I knew there were many people with far more experience and far more knowledge than I could claim.

Around this time I had a dream where I was in an overcrowded town square. The thousands of people gathered there could have gone either way into 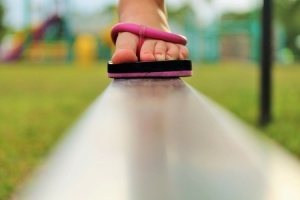 angry mob or force for positive change. The town elders had asked me to speak to them to influence the outcome but to do so I had to walk out across a narrow beam to stand over the crowd. I was terrified I would lose my balance and fall. It took me several false starts and dismay at my own inadequacy. But in the end I found the physical and mental strength to do it and spoke confidently and persuasively to the crowd. I woke up realizing I had to face my fears and take the next step anyway.

Growing the idea also required me to honestly examine my own personal experiences. I was already several months into the project when I remembered my own brushes with the possibility of violence. A long term boyfriend who was delightful almost all of the time but had a terrible temper – enough to threaten me with a beating one time and strangulation when i ended the relationship. The jealous brother of a boyfriend raging at the world in general and me in particular. The ticket collector in Tangiers who threatened me at knifepoint if I didn’t pay a bribe. The guy who tried to mug me in London’s Oxford Street by pulling me backwards off a bench with one arm around my throat and a hand over my mouth. I had buried all of these incidents in my subconscious but now they were back as material. As food for thought.

What I realized was that in all of these cases, despite my terror and acute awareness of physical weakness relative to the man, I was incredibly calm (in the moment at least… not afterwards) and I stood my ground. From somewhere I found the strength to look them in the eye and appeal to their better nature.

I realized this was a clue to the whole process that we would need to develop. To enable girls to feel the way I did in that moment and to enable boys to find their better nature. To enable both genders to feel strong enough about themselves that they didn’t need to steal strength from another by either bullying or acquiescing.

The journey since then has been one of collaboration. The material of course, all those videos and the merchandise has been the creation of the hundreds of amazing young people who have got involved and had the courage to share their experiences. And the skills and wisdom of so many others. Filmmakers, script writers, website builders. Experts in how to embed information into the school curriculum and experts in fundraising. I may have initiated this but the Godson Project is not mine. It has always had a life of its own.

As of today our videos have involved 375 young people in the making and been watched over 2 million times. We have a Godson module which as been successfully piloted in 35 UK secondary schools and will roll out to 400 next year. We are working on pilots in Pakistan, Romania and Thailand. It’s still a long way from touching everybody, but according to Christakis and Fowler’s work on social networks, each of us affects 1000 other people. So it’s a good start. I’m so glad I dared to walk out on that narrow beam.