“Would you like to bunjee jump?” they asked us earnestly. I looked from my mother (in her 70s) to my silk dress and back to the salesman. “Er, no!” He persisted. “Do we look like bunjee jumpers?” I asked him with a laugh. “Yes, yes, yes. Very fit. Very good jumpers.” Seeing that we still weren’t rushing over to his stall he went on to explain to us that the rope only broke once. Oh, only the once. That’s ok then. And that was a few years ago. And what’s more, they’d got a new rope since then.

I had to admire the positive energy of the guys on the bridge at Victoria Falls. The bunjee jump goes from this bridge, into the rocky gorge and down to the crocodile infested Zambezi. If you wanted to take a high adrenaline chance then this was it. But we resisted and carried on walking.

We were staying on the Zimbabwean side of the Falls and had spent a fantastic few days being astonished by the high water force of the Falls, exploring the wildlife on the River Chobe (a tribute of the Zambezi in Botswana) and doing a cycle safari around the local villages. Now we were heading to the Zambian side to get a different view. If we could make it through the people selling bracelets and souvenirs who outnumbered the pedestrian tourists by about five to one.

But we managed that, and the border crossing and got drenched by Zambian spray from this astonishing tour de force… a similar wetness to the Zimbabwean side (the $2 rental raincoats seemed only to have a marginal impact on how soaked we got) but with different views. It was just as breathtaking. A blood stopping reminder of the power of nature.

On our way out we stopped to return the raincoats and were subjected to more hard sell. “You don’t have to give me money, give me your hair clip for my little sister,” urged the stall holder pointing to the 50 cent clip that was holding back my unruly hair.  I didn’t want to part with that, but after rummaging in my bag I came up with the complimentary pots of insect repellent from the hotel. He was very happy to trade some carved wooden spoons for them and I am not usually the meal of choice for biting insects so I didn’t mind giving those up.

Over lunch in a nearby cafe my mother asked if I was looking forward to the afternoon activity. “I don’t want to talk about it” I said, feeling that contemplation of the impending microlight flight would be more likely to put me off than encourage me. She took the hint and turned the conversation to dessert choices. Later as we waited by the airstrip and the microlight come shuddering over the bumpy grass towards us she thoughtfully let me go first before I lost my nerve.

It’s not that I mind heights – so long as I don’t think I can fall I’m ok with them. But I hate the feeling of dropping and my first glider flight a few months earlier had included way too much of that. I’d tried to enjoy that, I really had. Maybe for a few moments I’d even achieved it. But it definitely wasn’t an experience I planned on repeating. And now here I was stepping into something even less substantial – and this time without a parachute. And did they have the same safety requirements in Zambia?

The guy who was going to do the serious work gave me a cheery grin. He was a big enthusiast and his confidence was infectious. Later I found out he was a retired Zimbabwean fighter pilot, so I guess these short turns around the landscape were pretty relaxing compared to that.

They strapped me in and removed my flipflops (“in case they fall off mid-air and get jammed in the propellor” – I didn’t need any more persuading on that front!). I felt like I was riding pillion so put my arms around the pilot’s shoulders. “That’s very nice,” he observed, “but not really necessary”. A little red-faced I moved my hands to the sides of my seat. And we were off. Bumping down the grassy runway with what felt like little more than a hairdryer and good faith to lift us into the air but there we go, we were flying.

It did take me a few minutes to relax but compared to gliding it was delightful. The wind in my hair the spectacular falls underneath, the vast expanse of this part of Africa – stretching for miles with no sign of towns or highways or electricity pylons. Through the intercom my pilot pointed out hippos in the river, the geology of the Falls – only really clear from the air – some elephants  strolling through the bush, the rainbows in the spray. It was glorious. Like the flying you can do in dreams. I stretched my arms wide and felt the air rush through my fingers, a broad smile on my face. It felt like splendour. 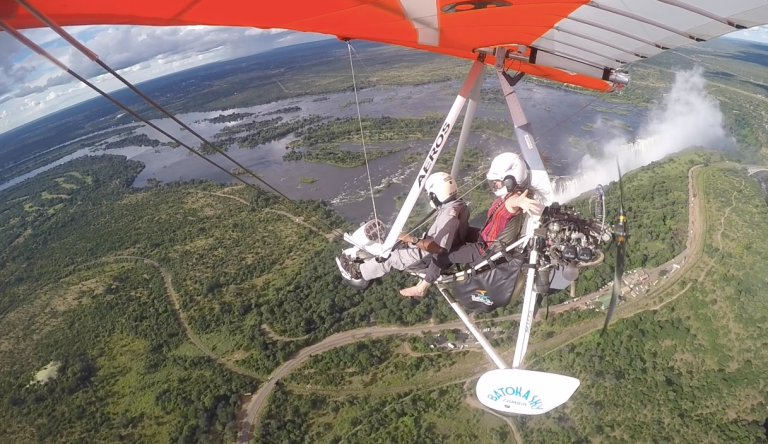 After landing and unbuckling I swapped places with my mum and she also loved the experience (she is more intrepid than me when it comes to air-bound adventures – took her first hang-gliding trip for her 70th birthday). On the way back to the border in the minibus they provided we chatted to the Frenchman who was the only passenger. He had come from his conference nearby to take the trip. “Only you?” we asked since he had mentioned there were several hundred people at the conference. “Oh yes,” he said airily, “It’s because it’s an aviation conference and everybody knows just how dangerous microlights are.” Good job we heard that afterwards.

So no, we never tried the bunjee jumping. But we got our own bit of adrenaline – and a far better view. A once in a lifetime trip from Z to Z.