I was tired and confused when the project manager picked me up from Addis Ababa airport. As usual I struggled with the bombardment of stimulus when arriving in a new place – the crowds, the temperature, the new smells, the hustle and bustle of the airport. It was a relief when his battered white pick-up eventually made it through the city traffic and got on to the 80km road to Nazareth. It was pitch dark most of the time and after an hour I had slumped into silence.

Half asleep and a little overwhelmed I didn’t stop to question my sudden conviction that a child was sitting on the dashboard facing me. I asked her who she was. “Juniper” she answered confidently as though it might almost have been self evident. “Who?” I asked, not stopping to wonder what was going on or why the project manager was not reacting at all to this sudden appearance. “You daughter” she explained patiently. “I thought I’d come on this trip with you”.

At the time, I was in my 20s and had never wanted children. That kind of thing was high on my sister’s list of intentions but I was more focused on an exciting career, seeing the world and living in a flat in London. So it was quite a surprise to be introduced like this. True to her word the child travelled with me on this and other trips over the next few years. She tended not to be around at home. And I got so used to it that when I did decide to get pregnant a few years later I described the decision as “having Juniper” not having a baby. Apparently during the birth my lovely midwife Becky and good friend Jo were in my kitchen discussing worriedly what would happen if it turned out to be a boy.  Of course it didn’t. She was always going to be Juniper.

I spent the next week or two in Naxzareth with the children at the orphanage project. Perhaps one of the most surprising things about them for me was when I got out my stock of felt pens to distribute. They immediately self organized into a quiet line starting with the youngest – who got first choice – and working up to the oldest. I couldn’t imagine seeing such patience among children at home. 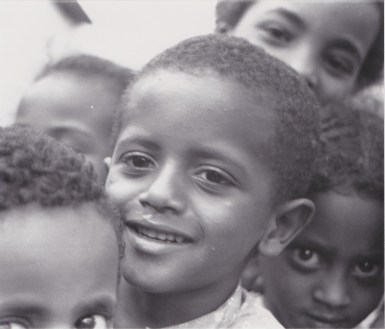 As always with a group of children, some were more confident, sitting on my bed when I was writing my journal or showing me things at the orphanage. Others hung back watchfully. One of our EthiopiAid donors had sent me a pile of seed catalogues to bring. I had thought it odd but her instincts as a retired school teacher were quite right. We spent hours together cutting them up, choosing favorites and making beautiful gardens.

Despite my usual avoidance of anyone under 18 years old I got used to this small crowd following me around. At night, listening for the lion that was alleged to roam the area, it was a comfort to think of them all tucked up in their nearby dormitories. And I always feel that Juniper is somehow connected to them.