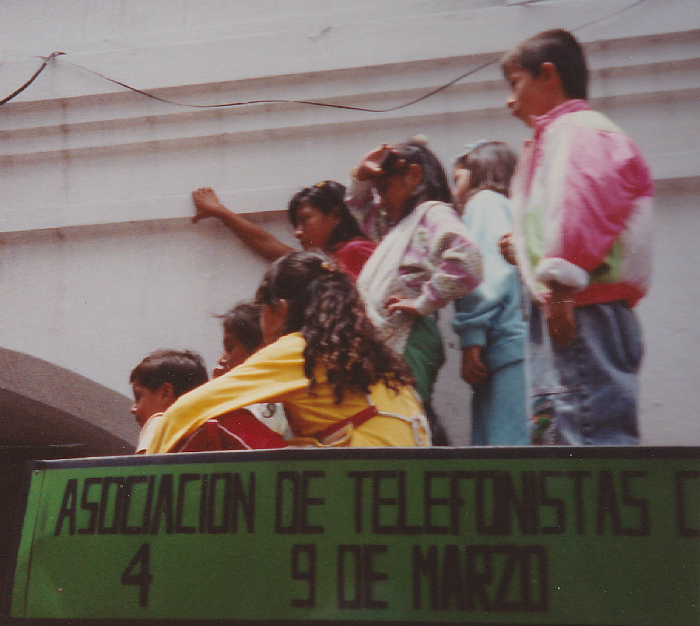 Flying into the airport was one of the more exciting approaches I’ve made in a regular plane. There was heavy fog and then suddenly the plane wheeled round and the side of a mountain loomed into view startlingly close to my window. I quickly reached for my standard reminder – they know what they’re doing. They do this all the time. Flights arrive at Quito airport every day. It’s fine.

At the airport as usual there was a man standing with a sign for “Mr…” . As usual he made the brilliant observation “But you’re a woman”. As usual I laughed it off, congratulating him on his perceptiveness. I was rushed out to a waiting car and straight to the customer’s office. “What happened there?” I asked, pointing to a ruined building on the other side of the road as we sped along. “Plane missed airport,” the locals explained shortly. I blinked in surprise. After a couple of minutes I pointed again. “And that one?”.“Other plane missed airport.” My faith in pilots was getting a little less secure at this stage and when I saw a third gaping hole in the streetscape I decided to leave well alone. 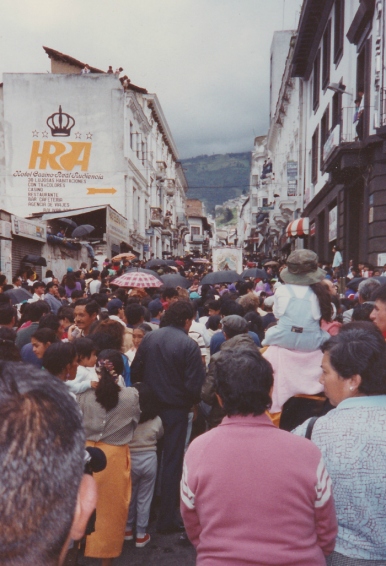 “We have to run,” they explained, hurling the car halfway into a too small parking space and leaving the rear end to fight its own corner against the heavy traffic. Flight-dazed I jumped from the car, darting back to grab my briefcase and the heavy manila envelope that was our tender document. The contract was worthwhile enough for me to have travelled from Europe. Though sadly my luggage showed less commitment. It had followed me to Florida and then Mexico City – just delayed enough to miss me each time. It also turned up here too late for my departure to Chile and only caught up with me later that week in Rio. Given the frantic schedule there was no time to buy anything – when push comes to shove, it’s surprising what level of grooming you can achieve by steaming your suit in hotel showers and drying your underwear in the trouser press.

We were running because my flight had been delayed by an earthquake. If you are a regular reader you might by now understand why I often travel alone. The drama quotient seems to increase all on its own just to keep me occupied. Accompanying me on my travels is not for the fainthearted.

Despite our best efforts though, we were 20 minutes past the tender deadline and the very stern clerk was having none of it. Usually I am pretty adept at talking my way through this kind of situation but this time there was nothing doing. Probably not helped by my refusal to pay bribes. We shuffled out somewhat anti-climactically. And burst out laughing. The whole situation was so absurd. The delayed flight, the frantic dash from the airport, the lack of luggage – and all for what turned out to be a wild goose chase. A tender that could well have been a stitch up from the start.

Still it did mean I got a day to roam around Quito, enjoying the sunshine, the smiling locals, the colourful market and the steep streets. Some things can’t be helped, we may as well shrug, smile and go with the flow.

One thought on “Quitting in Quito”